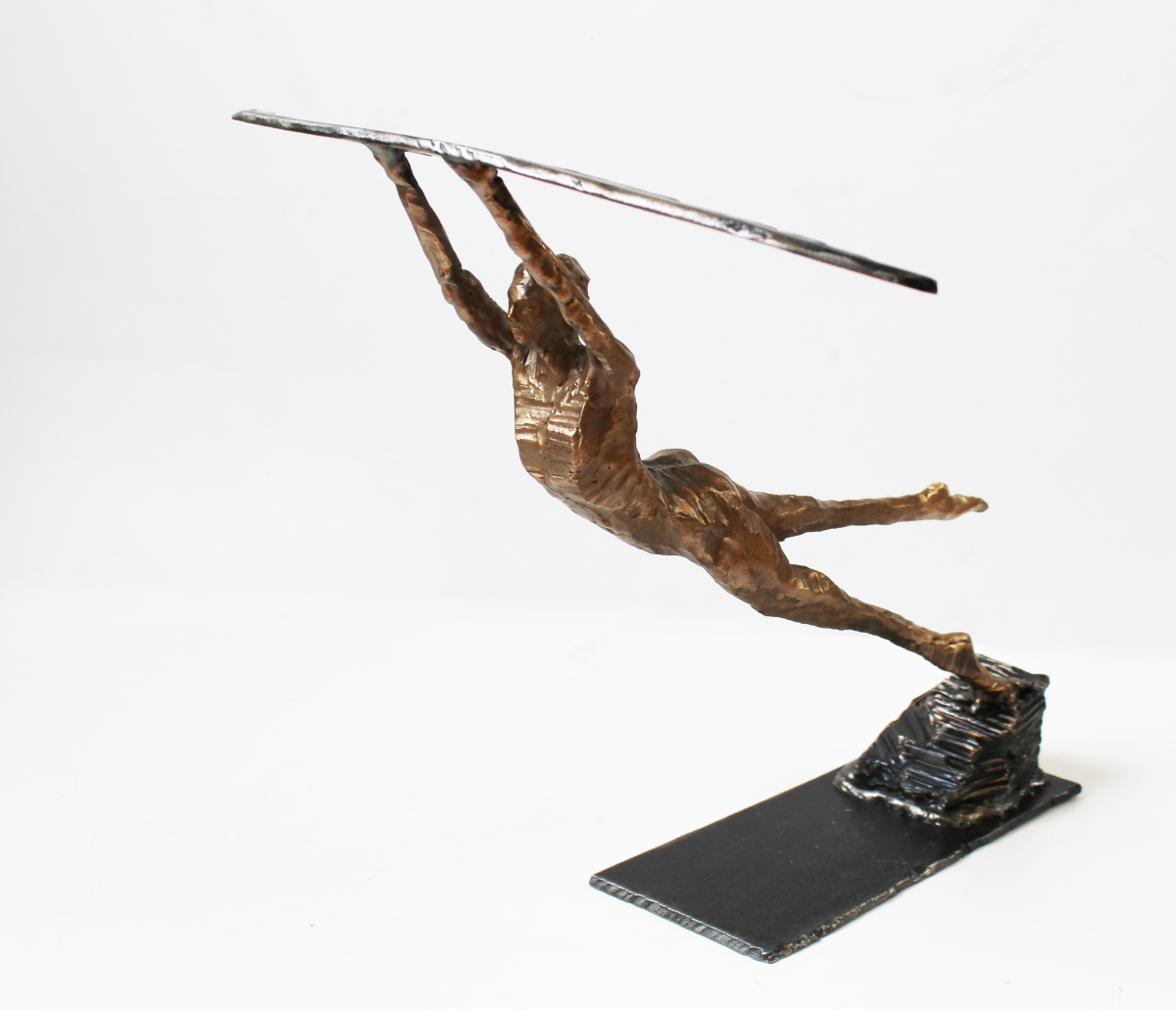 If you have been around Bluff View Art District for any amount of time, you have seen the work of sculptor, Russell Whiting. Russell first became part of the River Gallery family in the mid-1990's and has continued to bring such a brilliantly creative element to the gallery and its surroundings.

Russell hails from Louisiana where he first started carving wood as a child. Eventually, he began to work with steel as a welder on oil rigs in the Gulf of Mexico, which led him to become a self-taught artist that has blazed the trail for carving steel with an acetylene torch. In his artist statement, Russell states, "strongly influenced by classical forms, I have begun to recognize the validity of my own subconscious dialogue as an important source for my work. This fusion results in classicism with contemporary execution. The creation of my images is influenced by many factors: religion, ancient cultures, cinema, other artists, etc. The images are combined and mutated and reborn with no regard to logic or their cultural origins."

Most recently, Russell has been creating with a different medium, bronze. In our current July/August 2020 exhibit you can find three of his most recent bronze pieces.

Continue below to read our interview with Russell and watch some videos of his bronze sculpture process.

Tell us about your most recent work. What was the inspiration behind it?

I had the opportunity to cast some figures in silicon bronze with a couple very capable foundry enthusiasts. Casting bronze is a process that relays on team work and focus to what’s going on in the environment. I have been casting bronze since the early 90’s and it is important to participate in metal pouring in order to keep the skills intact, so that you do know what’s happening at all times. So when the stars lined up and I was able to have some work cast I jumped on it!

What does creativity mean to you and what fuels it in your life and work?

For me creativity is a path that I follow, it starts with the thought of an image or composition of 2D and 3D visualizations. Then comes the sketch, if I’m lucky I get it down on paper before I forget it. When I do capture a idea I can play with it in Photoshop or just go straight to a steel carving without any guidance except memory.

Tell us about a time where you felt discouraged or full of self-doubt and how you moved past it.

I never really feel discouraged nor have self doubt or at least not for long enough to effect the momentum of my efforts. 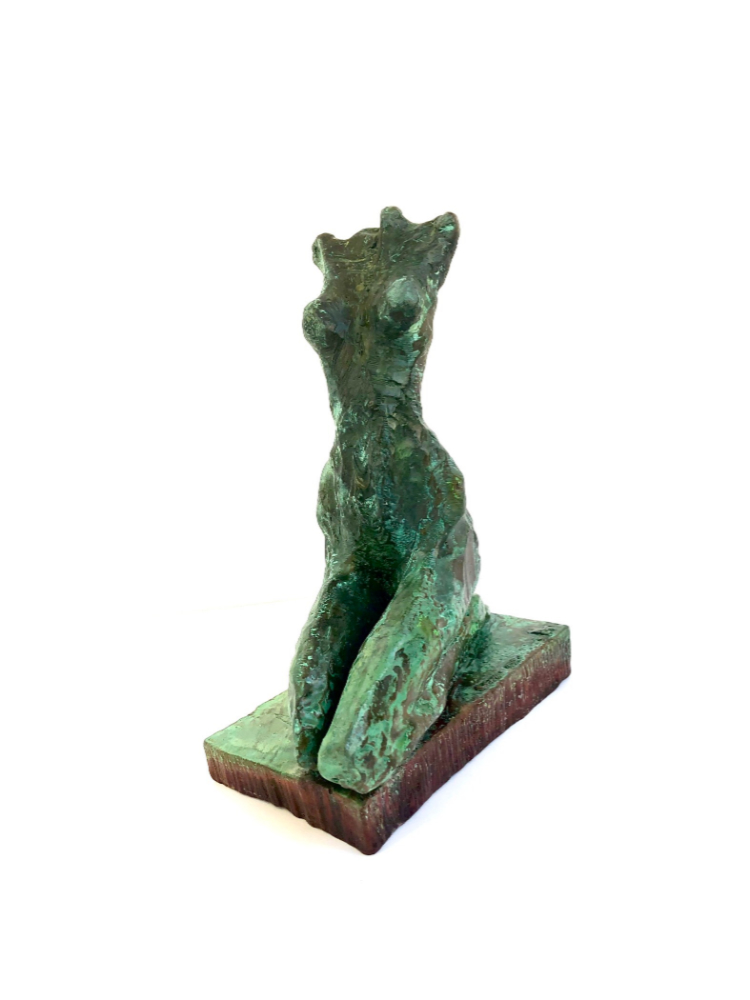 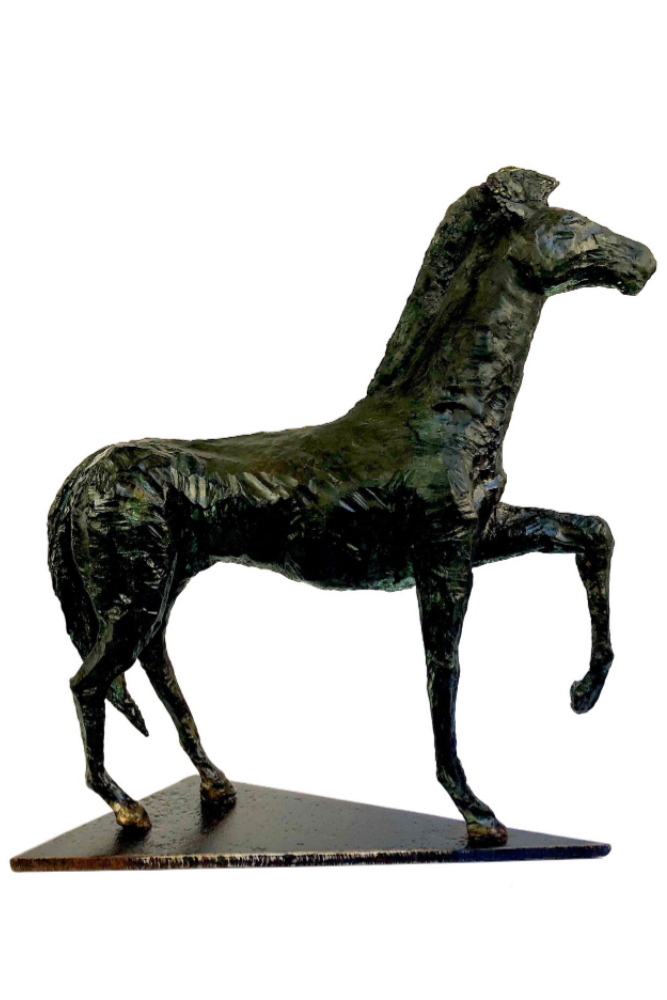 What drew you to work with steel and what continues to bring you back and sustain your ambition?

I have a long history of working in shipyards, fab yards, and offshore construction. I’ve always like working with metal and have a good grasp of what is possible in its use. I have reproduced the environment of heavy construction in my studio area, I feel that the space empowers me to turn my dreams into realities.

What piece of your work are you most proud of and why?

What is the best piece of advice you were given early on in your career as an artist?

The best advice I have been given was by ceramist Casey Ginn. He told me to sell everything, anything to make the next piece possible!

"The white ceramic shell has this bronze figure inside. This figure is first made in wax, then dipped seven times in the ceramic slurry to build up a thick shell.The pour cup is at the top. We then invert the shell in a hot furnace to melt out the wax leaving a negative image inside the shell."

"Next the empty shell is turned back cup up and the molten bronze is pouring into the cup. It flows down the piping system (vents and spruces) to fill the negative image. The shell is then broken off and the spruces are cut off. The sculpture is chiseled and chased to clean and finish. This process is called 'the lost wax process'."

YOU CAN VIEW AND PURCHASE RUSSELL WHITING'S WORK HERE.